Mahina Kai - Day 2 Marion to Bermuda – Over the edge 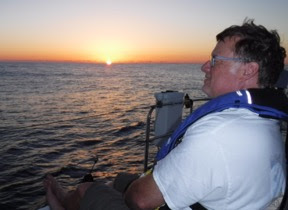 While the first half-day of the race is characterized by the activity of the start, the second day is about leaving the continental shelf behind, and arriving at the gulf steam current.

As the race moves along, the pack spreads out.  During night watch, we leave one nearby boat behind, and a USNA sailboat which has been shadowing our course within sight, changes heading to pass behind us, turns off AIS, and within an hour is gone from sight.  Nothing else in sight now, and it may stay that way until the final hours of the arrival in Bermuda. 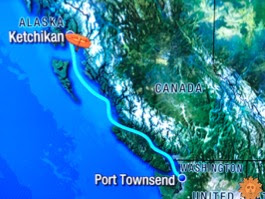 There is a boat race in the Western US, from Port Townsend WA to Ketchikan AK, which ran a couple of weeks ago.  It apparently is open to vessels of all sorts without an engine, and I saw kayakers, catamarans with oars, human-powered craft, and many others on TV coverage.  The race distance is similar to MBR, but it is a near-shore race, with support services along the way and ports that a boater can pull into in case of trouble.   Being a near-shore race, it seems to me that you never are forced to say farewell, cut the apron strings, and head into the abyss.  One of the racers said: “To reach Ketchikan you have to build your own little victory, every hour of every day.”

Those are true words no matter what the challenge.  In offshore racing, once you are in the big blue ocean, you need to be your own problem solver and build those little victories.  There are two “on your own” moments in this race.  The first is when, late in day 2, the depth gauge flips from around 200-300 feet over the continental shelf, to “no reading”.  When I write that in the log, I always think of a final scene from the “Titanic” movie, and it’s a long way down!  The second is when, at the end of day 2, the boat enters the gulf stream.  When the prevailing winds and the prevailing seas meet the gulf stream current it creates a cacophony of sea state.  Pilot-friends talk about the Yaw, Pitch, and Roll of an aircraft, and you get all of those in the gulf stream seas as these weather forces meet.

Dinner of Tortellini soup with Shepard’s pie, and the Cookie of the day: “fair winds” Clouds